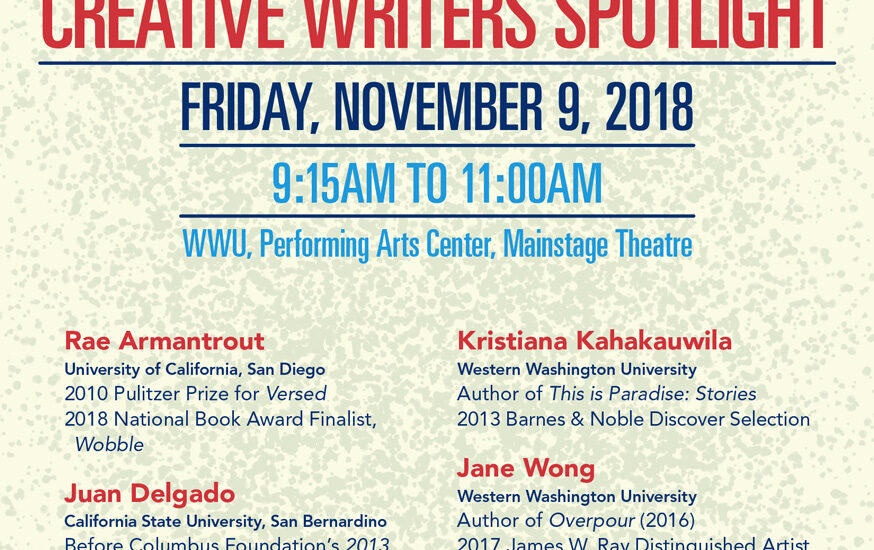 Please join us for the opening event of the 2018 PAMLA Conference!
The PAMLA General Session: Creative Writers Spotlight is a special event welcoming everyone to the conference and introducing four of our region’s most interesting and vibrant creative writers, who will read from their works and discuss their writing process. Free and open to all.

Rae Armantrout, University of California, San Diego
Rae Armantrout’s most recent books include Versed, Money Shot, Just Saying, Itself, Partly: New and Selected Poems, and Entanglements. In 2010 her book Versed won the Pulitzer Prize in Poetry and The National Book Critics Circle Award. Her poems have appeared in Poetry, Lana Turner, The Nation, The New Yorker, Bomb, The Paris Review, Postmodern American Poetry: A Norton Anthology, and 100 Years of Poetry Magazine. A new book, Wobble, is forthcoming from Wesleyan this fall, and is a finalist for the National Book Award. Juan Delgado, California State University, San Bernardino
Juan Delgado’s Green Web (1994) was awarded the Contemporary Poetry Prize, and poems from El Campo (1998) and A Rush of Hands (2003) have been reprinted in various anthologies. Vital Signs (2013), a book about his hometown of San Bernardino, won the American Book Award. His creative essay “Nuestra América Blurs” is featured in this fall’s special issue of Pacific Coast Philology. Juan is Professor Emeritus of English at California State University, San Bernardino. Kristiana Kahakauwila, Western Washington University
Kristiana Kahakauwila is a hapa writer of kanaka maoli (Native Hawaiian), Norwegian, and German descent. She is the author of This is Paradise: Stories (Hogarth, 2013), a Barnes & Noble Discover Great New Writers Selection. Kristiana earned her BA in comparative literature from Princeton University and her MFA in Creative Writing from the University of Michigan. She is an Associate Professor at Western Washington University. Jane Wong, Western Washington University
Jane Wong’s poems can be found in Best American Poetry 2015, American Poetry Review, Third Coast, jubilat, and others. A Kundiman fellow, she is the recipient of a Pushcart Prize and fellowships from the U.S. Fulbright Program, the Fine Arts Work Center, Hedgebrook, and Bread Loaf. She is the author of Overpour (Action Books, 2016) and is an Assistant Professor of Creative Writing at Western Washington University.